OpenStreetMap (OSM) is perhaps one of the great examples of how information collaboratively can build a new model of cartographic information. Similar to Wikipedia, the initiative has become so important that today for geoportals it is preferable to place this layer in the background to worry about updating information of its own in aspects such as points of interest, business or data that will be impossible to keep updated.

Using OSM, a Catastro project can be dedicated to your business, plots and local specialty cartography, allowing the reference data to be the ones that people update, if it is possible to promote collaboration, aware that although their location is not very up-to-date, One day it will be, because it is something irreversible.

There are many alternatives to update the information in OpenStreetMap. Depending on what you are going to work, the option to do it online or from mobile is easy for street spots that are made by mere photointerpretation. But in case we expect to make tighter topologies, with maps in DXF, GPX or CAD lovers, an interesting solution is JOSM, the client tool developed on Java.

This is an example, in which the OSM layer is outdated. I can see it because the Google image is more recent than the OSM can show, usually Bing, that in many emerging countries is quite poor.

The map shows what that area was like two years ago.

The image shows how it was after the overpass bridge built last year.

The JOSM program is relatively easy to use for anyone who has used a program such as AutoCAD or Microstation. Being built on Java is multiplatform and once downloaded it is only ready to work. As you can see, on this image of Bing is that someone once updated the maps. 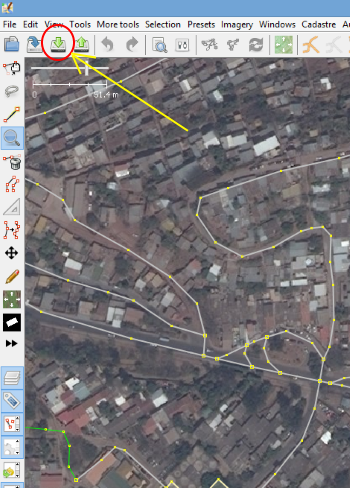 By pressing the off button, the system lowers the area of ​​interest in vector format, to edit, delete or add.

In this case, I want to update the bridge in unevenness. The side panel allows you to choose which layers you want to display, with the limitation that you can not load Google Background images by OSM policies to avoid conflicting rights, but also because the scrolling of the images would cause a conflict difficult to maintain .

One option is to drive on the bridge, with the mobile gps activated and then download the data. JOSM supports opening data from georeferenced images, DXF, formats obtained with GPS such as GPX, NMEA, as well as loading a WMS service, among others.

To edit or update you must have a user, which takes a few minutes on the OpenStreetMap page.

The side panel shows the layers of

Available background, on, off.

To choose which we expect to see in this panel is selected from the top menu imagery - and here are available Bing, MapBox Satellite, Mapquest Open Aerial, wms own routes or also images warpeadas with the functionality that the program brings.

You can also choose the style in which we expect to see vector objects.

At the level of functionality, you have to learn some keyboard tricks or scroll the mouse as the zoom buttons are limited. The + sign is Zoom in, the sign - is zoom out, as much as I wanted I did not find a button to scroll (pan).

When touching objects, contextual options are activated, such as changing the orientation of a path, continuing or adding nodes.

You have to play with the menu to see the existing functionalities, and also see the range of plugins to choose what may be of interest to download.

To edit shape-changing lines, I have only had to move nodes, and touching segment center creates new nodes without much complication. To edit a node in which two lines are joined, I have touched the vertex and the disconnect option, although I preferred to make a previous node, cut and delete the spare segment. Then to the objects you have to assign them what they are, if they are main ways, bridge type highway connectors and indicate if they have one or two directions.

Result of the edition

I also used to edit some nearby lines that were oversimplified and have added a couple of sections that although not seen in the image of Google, I know them because every morning I walk through here when I go to my work.

Finally, after a while of playing, I have left the vector work.

When uploading the data the system validates inconsistencies, such as nodes not connected, with option to zoom to the conflict zone. It happens very little because the snap is quite functional and practical. It also validates overlapping topologies of the same type and strange connections between sense of track. Other aspects that validate are conflicts with other data that someone may be coming up from the same area.

Once uploaded, you can see the change almost immediately in OSM.

We call this collaborative cartography.

I suggest taking a look at a Presentation made by Jorge Sanz, With statistics, data and achievements of OpenStreetMap that helps us understand how much we occupy open our mind to the crowdsourcing model.

Compare OpenStreetMap With other web maps